Earlier this week i posted a prediction about the next iPhone model that we can expect from Apple in the summer. Although, it will have a killer feature revolving around payments and identity verification through the addition of new NFC hardware and biometric verification, the form factor will remain the same. To be clear, i don't expect the next iPhone release to change form factors from the current iPhone 5 body type (if the form factor changes, that would be a lot more exciting for everyone so i am hoping i am wrong about this ). Instead i expect apple to change up the form factor the release after next (so think Summer of 2014). This is what i am currently calling the iPhone 6.

iPhone 6 will be Apple's hail-marry attempt to prove to the world that Apple can still innovate and revolutionize consumer electronic product categories without Steve Jobs. So how will they wow us ?

The iPhone 6 will break the current mold of industrial design for smartphones (a thin slab), the very mold that Apple established in 2007. The new generation apple industrial design will rely on curved glass screen technology.

The minimum: "edge to edge" curved glass screen
It would be the long rumoured "edge to edge" screen. Meaning the display would curve around the edges of the device to eliminate the bezel on the side.

The maximum: dual displays, with single wraparound screen for all 4 surfaces of iPhone
Apple could run with the curved glass idea beyond the "edge to edge" screen idea. They could shoot for the stars, and create a screen on both sides of the device. A complete wraparound screen. Meaning it will be one single piece that goes all the around the front, both sides, and the back of the device. Check out this patent diagram from Patentlyapple.com explaining the vision 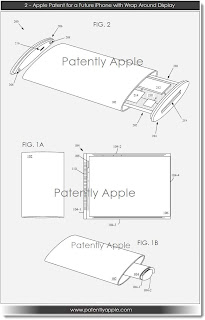 This will be REVOLUTIONARY. Since users will be able to pick up the phone from either side and it will "Just work" without needing to think about which side the device is facing.

Here are some other early leaked hardware shape mocks/ prototypes. Courtesy of Macdailynews.com

Reasons for apple doing this:
Posted by Unknown at 11:27 AM