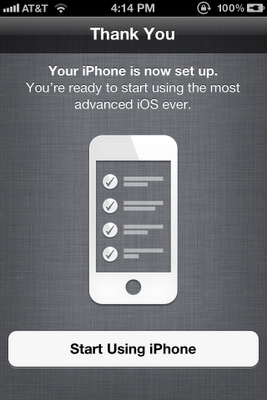 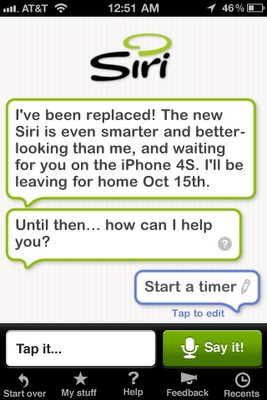 Good News:
I upgraded to iOS 5 yesterday. In short: the notifications tray is awesome, the new weather app with hourly support is great, and the rest feels like nice subtle tweaks.
I decided to try out: find my friends, airport utility, reminders, and newsstand :)
Sidenote: the upgrade process was not too smooth, it bricked my iPhone into DFU mode, and required a restore attempt (albeit this was during the peak of the post release rush).
Bad News: Good Bye Siri (on iPhone 4 )
Apple's focus on Siri as the key feature of iPhone 4S is daring and ambitious. I have been using Siri since its release on iOS , and i think it has potential to be truly transformative . It can be the stepping stone to all of us learning the behavior of talking to our technology (think star trek and talking to the computer ).
My problem with apple's approach is that they are killing Siri 1.0 on iPhone 4's like mine. I get that it is a major reason to upgrade, and they really want to make the line between iPhone 4 and iPhone 4S stark . But i think it may alienate the core group of original users who could have been the early evangelists and turned into ambassadors for this visionary technology. Now i think a number of them will feel burned and not convert to evangelizing the product and technology .
Posted by Unknown at 12:54 AM