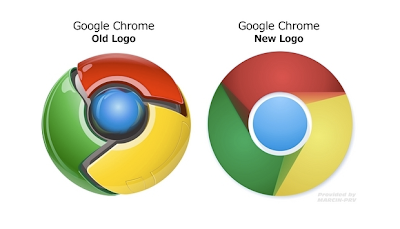 I have been working with the Chrome Web Store Apps for 4 months now. Yesterday i discovered the above image, the one on the right is allegedly the brand new Chrome logo. Rumour has it, that the changes are preparations for a big media blitz to introduce Chrome OS devices to main stream consumers, and oh by the way push the Chrome Web Store and the Chrome browser to America.
Having experienced the beginning of the App wave on iOS as an original iPhone user and involved in the early app developer community, i can tell you the Chrome Web Store HAS NOT SEEN the Hyper Explosive growth of App consumption like the iTunes App store did in its first 4 months.
Despite this slow start i am very bullish on the future growth of the Chrome Web Store and Chrome OS.
Below, I break down the top 3 reasons why the Chrome Store has not exploded in app downloads yet. I break down the top 3 strategic OS moves Google needs to do in the Post PC era. IMHO, Chrome Web Store/ Chrome OS fit very nicely into overcoming hurdles that are preventing explosive growth of Chrome Store as well as combatting the competition in the "Post PC" OS wars.
Then i venture a guess at the size and timeline of the growth of the web store over through the end of 2011 and optimistically extrapolate 2012.
3 clear reasons for the lack of explosive growth of Chrome Web Store :
1.Chrome Apps have to compete with THE WEB and websites, a robust and flourishing ecosystem that users get and love.
2. The idea of "Web Apps" has not taken off yet.
- Yes FireFox Add Ons have 2.7 Billion downloads.
- Yes FireFox, Chrome, IE9, Safari 5+ all have extension support/ galleries for them
- No the consumer has not figured this out yet.
3. The Chrome Store is missing the key consumption point for its store, a DEDICATED CHROME OS devices. The iTunes App store would not have worked without the iPhone.
What 2011 will bring for Googles "Post PC" era strategy.