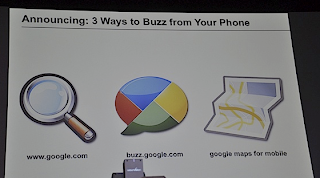 Ive been playing with Google Buzz all day, and the more i learn the more and more impressed i am with it.
The first thing that jumped out me was, "finally Gmail has caught up to modern social web tools for a post facebook service" . But now upon looking further it seems like Buzz is much bigger than just adding a status feed feature into Gmail.
Watch this Video that explains Google Buzz mobile. It shows you how they have added buz into the core of the google maps for mobile experience on android. It is now a Layer like satellite or hybrid, or maps. There is now a Buzz layer. Which overlays Buzzes directly onto the map.
There is a great Engadget article describing all this. Check it out.
The real estate that Google gives Buzz is also telling. They launched at a press event vs a quiet roll out. They launches a mobile site for buzz, they integrated buzz into google maps mobile 4.0, they are rolling it out across all Gmail users, The Buzz logo is even in the corner of the Google page.
Google Buzz is a big convergence product that has been a long time coming for google. It is a new type of product for Google, a social network product but one that strategically leverages the wide gammut of Googles assets. Buzz leverages Gmail Inbox, Gmail Status, Blogger.com and Picasa content, Buzz for mobile Buzz for maps, Android OS/devices, Lattitude, etc
I think this will do significantly better than Orkut for Google in terms of usage and uptake.
If i was Loopt i would be worried, or scrambling to get acquired.
I wonder how Facebook will retaliate to this ? Share your thoughts in comments.
Posted by Unknown at 11:46 PM