A good friend, was resourceful enough to get a Keon Geeksphone device. Of course ForTechies volunteered to do a proper unboxing and review. 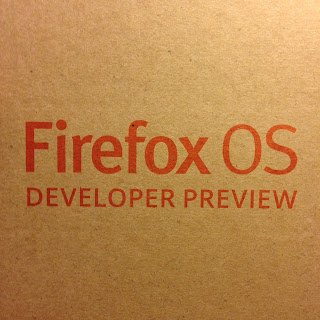 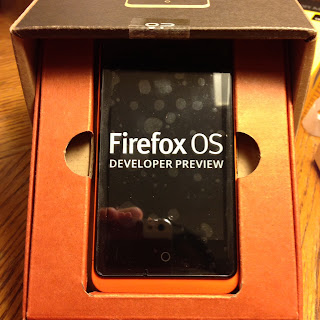 The Keon is the first Firefox OS device, labeled : Developer Preview. It is not trying to hide the underwhelming hardware specs. The initial reviews of it i read around the blogosphere complained that the hardware was so weak that even scrolling the home screens felt sluggish.

In my own experience, the hardware definitely is a limiting factor. The OS jitters in certain places and animations are not as smooth as their makers intended them to be.

HAVING SAID THAT, i am blown away by Firefox OS from my first hands on use. It feels like a cross between iOS and Palm WebOS. Multitasking is similar to WebOS/ iOS 7 approach. There are bezel swipes that provide notification trays/ control center for toggling wifi on/off. Search is intuitive.

Once the hardware costs drop lower, a trend that is showing no signs of stopping. Firefox OS will get the hardware resources it needs to hum. I think this is a smart play to start with really weak / cheap hardware to prove that the price point is achievable . From that point on the hardware/experience will keep improving almost on auto pilot thanks to Moore's law /  continually falling prices of CPU and memory.

My main take away from the OS experience itself was that , at no point did i feel lost on it. Whereas on Android i still feel disoriented once in a while despite that i carry a LG Nexus 4 with me at all times , and have been working on Android apps for 4 months now. From an iPhone centric perspective Firefox OS is simple and straightforward.

Ok enough gushing, here are the unboxing pics you want to see.

The packaging was well done by Geeksphone.

The headphones and power cable were bottom barrel. But that is to be expected in a device whose mission is to drive down the price of a smartphone as low as possible, to make it affordable for the developing world.

The phone itself was plasticky, but not in a terrible way. The back cover can be removed to get at the battery and the SIM card.  It uses

The software was well thought through and designed. The icons looked good (as much as the low res screen would allow) , and the Marketplace (if you ignore the small amount of apps or to be more clear webapps available today)  and browser were 1st rate.

I hope to find some time later this fall to make a firefox os webapp, and submit it to the Marketplace. I am interested in seeing how they handled the developer dashboard and developer submission process.

There is definitely an opportunity to provide a friendlier experience in terms of submission / app management tools that what itunes connect provides iOS devs. 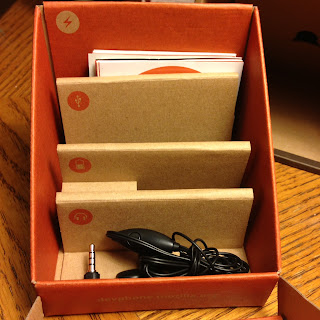 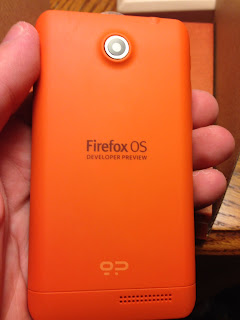 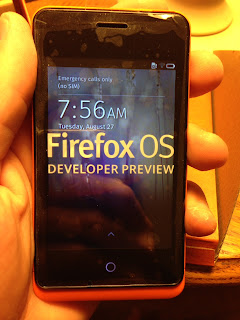 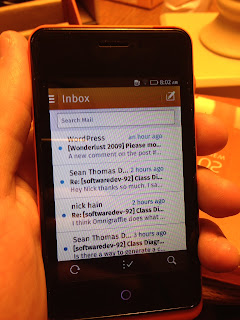 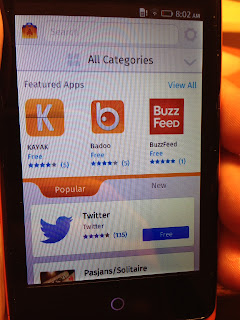 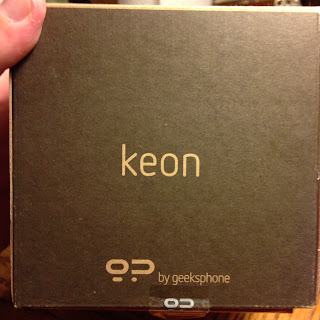