+++++Update++++
Twitter for chrome, birds nest has already been updated several times. V 1.4 just landed and has:
- follow/ unfollow features as requested by popular demand.
- Has been renamed from Bird Nest - Twitter for Chrome to "Twitter for Chrome, Bird Nest"

If you've been reading ForTechiesOnly.com religiously (and you should be ;) ) you will have noticed that ForTechies tends to get the early scoop on some of the hit apps in the chrome store. Specifically , ForTechies has been covering the releases of 64px.com chrome apps. Including facebook for chrome, pinterest for chrome, and instagram for chrome. ForTechiesOnly breaks the story on hot chrome apps and other tech media figures it out monthsl later, for example check out this AOL video on Instagram for Chrome.


64px.com apps tend to dominate in the social category on the chrome store, that's why i am excited to report that this week 64px has done it again with a new app addition into the social "for chrome" portfolio:

I just downloaded it and gave it 5 stars. You should too.  Here is the link :
https://chrome.google.com/webstore/detail/cdoinklelehcpndgmcddkkdhibpoglnk 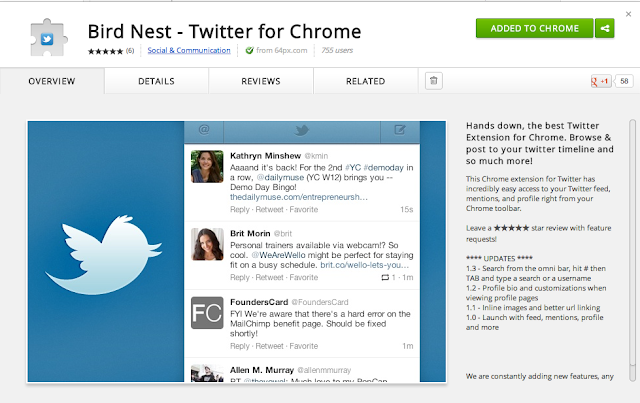