The latest developments in social networking, mobile apps, and web 2.0 tech through the lens of "captology". The post is organized into sections to try and bring structure to the developments in the hyper active social media industries:

Captology - definition:
Websites to mobile phone software — can be designed to change what people believe and what they do.

Industry Moves:
a. Skype and gaming
b. Yahoo and social networking

a. "Crowd surfing" services:
aim to utilise "crowd" wisdom to create a filter for content that weeds out the low quality content in favor of more credible and personal content. Below are examples of services that provide an interface and the technology necessary for tapping into "crowd wisdom" to create a credibility filter.

Jaanix (Web):
Jaanix is a new start up with a tag line that sums up what they do pretty well. Jaanix "helping you discover good stuff on the internet".

This new service uses "crowd filtering" to create the optimal information channel for news and videos. Each user becomes a content contributor of news and video stories. The community rates the content by voting for it (a "Jaa") or against it (a "nix"). The more "Jaas" a story receives the higher up it goes in the list (Check out the screen shot of how the interface actually works below). The service lets you personalize your filter preferences through a "tag cloud" interface (see the image below). This is an excellent approach for taking advantage of the underlying "trust based" technology. Meaning that the Jaanix system is powered by node mapping algorithms that also take user feedback into account to create an approximation of the "level of trust" between two nodes in the network. The higher the trust between two nodes the more likely it is for one user to see the contributions of the other in their stories list. 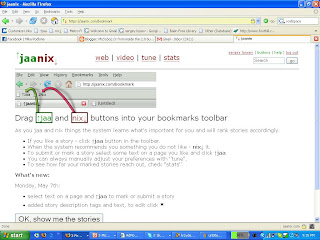 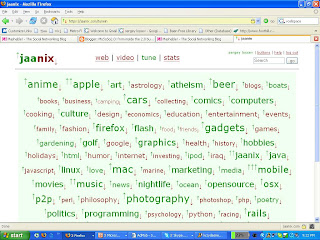 This service is building on the foundation made by successes of other "crowd based" services such as:
www.digg.com,www.stumbleupon.com, www.cambrianhouse.com etc.

Me.Dium(web)
Is a service that lets you see other web surfers who are currently viewing the same site as you are. The idea there is that this will create a new forum for user interaction around the content that they are interested in. Engaging in a chat conversation with other users of a site could in theory provide more credibility to the content being viewed. It could also facilitate new content discovery as users would most likely discuss other related content amongst themselves. This source of "crowd surfing" behavior has the possibility of being very popular in the web2.0+ and beyond future. To get a better idea of the interface implementation check out the screenshot below. If you would like to check out the service more you can follow the link to add your name to an invitation list on mashable.com. Get a me.dium invite. 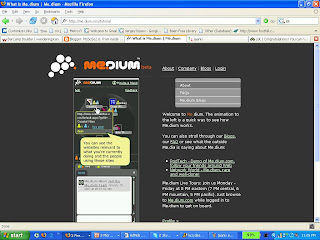 b. Location based mobile applications in the market

GPS based services for mobile phones have been slowly yet steadily achieving market penetration (even here in USA). However they are still not very evolved "mobile specific services", they are more of compressed for small screen rendering GPS applications that are like the stand alone units for the car from companies such as tom tom, magellan, and garmin.

Some developments this month are showing progress towards truly mobile specific services.
The first example is Ask.com's mobile location app for Sprint devices. This app is an interface that is made specifically for the needs of a mobile user. Everything from the type of searches possible to the automatic inclusion of a GPS location in the results to the user workflow are tailored to mobile use cases.

Another example of such marginal evolution is the Vznavigator application from verizon. I have been a user of the Vz navigator application on first my LG V and now my LG enV since the limited beta test. This month Verizon released version 3.0 of the app and i can attest to the improvements made since the beginning. The 3.0 release not only provided a more mobile specific interface but also enabled a new key interaction, "Place Messaging". Check out the service at www.vznavigator.com

UPDATE: here is another example of a mobile specific location based service in the market, mobilefuelfinder.com

These applications are marginal steps in adapting GPS applications for mobile phones. There are other examples of truly mobile location based services like Helio's buddy beacon etc, but that is material for a future post.

Recent Trend predictions:
Social Networks Integrate Ecommerce:
Social Networks are actively integrating e-commerce interfaces/technologies into their offerings. The nature of Social networking services (e.g myspace, facebook,etc) is to provide a forum for our digital social activity. So the next steps that these communities will take is to integrate more and more social interaction into their social media fabrics. ecommerce is an excellent example of the next segments of social interaction that will be integrated into online communities. Also the fact that i came across the Captology job post via the Facebook marketplace makes me a believer in social networks capturing more social interaction. Another great example is shopping, a very social experience. Just go to any mall and observe a group of teenagers. So it makes sense for social networking services to try and capture the social aspect of shopping into their digital media fabric. I will not even mention that it is an excellent way to make the services more "sticky". Or that such a move creates opportunities to monetize the huge consumer bases of such services. As examples of ecommerce integration check out the latest state of the market :

These moves were precede by other leading services already having classifieds systems:
Bebo (Check out Ebay and Bebo make Friends) and MySpace (MySpace replaces the mall) have had these features for quite some time.

Lastly there is evidence that supports this trend in reverse. Specifically if you watch
Ebay, an ecommerce leader. Ebay has started integrating more social features directly into their marketplace offering. Power sellers now have "profiles" instituted. These profiles are clearly a response to the emergence of social networking services.

Industry Moves: (start ups, incumbents, etc)
Skype moving to break into the gaming market. A significant industry move as it is one of the valley's incumbents for VoIp. This is a great example of how new digital modes of communication an interaction can impact human behavior. First There was the phone, then came skype and made people talk into their laptop instead of a headset, and now they are taking it a step further and are having video gamers experience voice based interaction for multiplayer games.

Yahoo rumored to be rallying to do another attempt at the social networking market. Rumors of a Bebo acquisition are running rampant through UK. Furthermore a friend of mine, who shall remain unnamed, just got hired into yahoo for a social network marketing role in order to prep for their future initiative.

General Tech/Design notes:
Ipods have become so ubiquitous that they are now fashion accessories. Click through to the following websites to see Ipod "art" for yourself. These sites sell stickers that cover your ipod front and back with a piece of "art". Since these iconic mp3 players are so ubiqitous and valuable their daily presence in our lives has triggered a counter culture effect is occurring. A market for personalizing the Ipod icon as your own individual fashion accessory has emerged. Check it out and maybe get something for your ipod ?